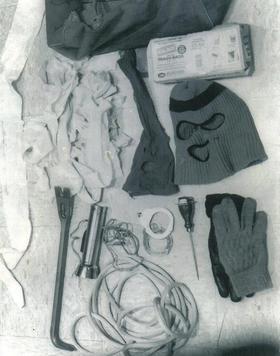 Ted Bundy was caught the first time for refusing to pull over when a cop told him too. Bundy sped off. When the police finally did catch up to him and searched his VW Beetle, they found the following suspicious objects:

– A crowbar behind the driver’s seat

– A pair of handcuffs,

– A strange mask made from panty hose.

The police also noticed that the passenger seat had been removed and placed in the back seat, which was extremely strange. Originally, the police assumed the tools were for burglary, as there was a recent string of breaking and entering’s in the area at the time. It was not until he was brought in and he was noticed to match the ID of the serial killer across multiple states that they worked out this was his bad of murder tools.

As everything had to be kept as evidence for a long time, previously the car was kept in DC’s crime museum. Unfortunately, this museum shut in summer 2015, luckily, Ted Bundy’s Car will be on display at Alcatraz East, a new Museum scheduled to open fall 2016, if anyone lives in the area and fancies a trip in the fall!